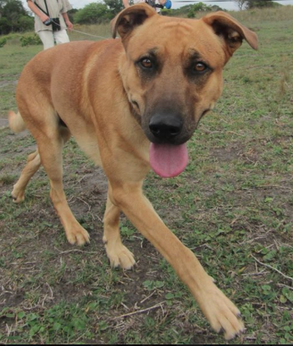 For those that are interested, a status update regarding our dog Thunder that got shot about two weeks ago. We have spoken to EKZNW, firearm experts, vets, a state prosecutor/lawyer and the provincial and national SPCA, so we have done our research and like to share our findings with you.

The long and the short of it is: Our dogs did indeed somehow escape, they allegedly did chase and kill a bushbuck in the greenbelt area around St. Lucia (so not inside the municipal boundaries). EKZNW acted within the boundaries of the law as they have the right to destroy ‘problem animals’ in the area in which they have the mandate to protect the wildlife. However, they did fault in certain areas, which are detailed below, and for which they may be prosecuted.

First of all, I want to express a thank you to all these people, many complete strangers to me, that have expressed their support and condolences to us over Facebook, but also in person. It was amazing to see that some people, some completely unknown to me, stopped me in the street or call me in person to express their support. It seems that St. Lucia really is made up of very caring people. So thank you for that.
Then, equally important: It is not my desire to make or see anyone as ‘the enemy’, and to divide the various stakeholders in this matter. On the contrary; I respect EKZNW for the work they do.

Moreover, I think we’re all in this together here, that is, the municipality, the residents and EKZNW and the Wetland Park Authority. It is my view that ultimately we all want the same thing: For St. Lucia and the greater area around it to flourish through ecotourism. We all thus work towards a similar goal, but the reality is that sometimes there are conflicts, as we have seen in this instance. These must be addressed, not out of spite and anger, but in earnest so that we’re all on the same page and can realise our common goal.

Besides, just as I as a safari guide have always the best intentions for my guests, if I make an error in judgement and one of my guests get injured as a result, I will, and must, be held accountable, regardless of how well I meant. The same applies to anyone else in their profession, including EKZNW. Trying your best is great, but if you stuff up due to taking wrong decisions, you must take responsibility and be held accountable.
It is for this reason I take the time to write this: To put all the facts on the table so all parties, including yourself, can act accordingly next time a similar situation develops. So here we go:
​But then… Their protocol stipulates that they can destroy a problem animal. The problem lies in the execution of that order to kill the dog. The shot fired at Thunder wasn’t a kill shot, and could never been seen as a kill shot. First of all it didn’t kill the dog on site, but it managed to get away and live for another 8 hours. Only after extensive surgery, blood transfusions and about 15.000 bucks later did it die. The wounds and entry holes were analysed and the following concluded: Only 5 of the about 50 pellets in the shotgun shell hit the dog, and entry holes were all about 10 cm apart. Thunder was thus shot from far away, and from behind as he was running away. The shot fired was a poor shot, and for that reason alone should not have been fired. By law, they should only have pulled the trigger if they were sure the shot would kill the dog on site. Not doing so led to animal cruelty, which is chargeable under the animal protection act.
Moreover, after having wounded the animal, they have the obligation to follow that wounded animal to release it from its misery. This wasn’t done, hence the dog appearing back home after a few hours, suffering from great pain and heavy blood loss.
Lastly, although an incident report has been made by the law enforcement officer and sent to his supervisor, the ‘evidence’ (that could show that the bush buck was really killed by dogs) was destroyed by immediately feeding it to the crocodiles at the croc centre. We can only ‘believe’ EKZNW who says that the dogs were in the greenbelt area, were chasing a bush buck, killed the bushbuck, and then were shot at in the green belt area. There is no way of proving any of that. I have asked for the incident report, but have received no reply to date yet.

So: what is next: Although I still respect EKZNW for what they do, and although being incredibly sad about the loss of our dog (a family member to us), I understand that they were just doing their job, and that the whole affair at large is one big accident. Especially since our dogs were first time offenders having never escaped before, (and probably being let out by someone (intruder?) that night). The problem is that one: death penalty to a pet dog (part of someone’s family) for killing a bush buck is maybe disproportional. But anyways, that is the law here so I will have to accept that. And two: if the order is given to kill a problem animal, it must be ‘killed’, not wounded and left to die. Taking a ‘lucky shot’ at it simply isn’t acceptable. If they have to do it, it must be done properly or not at all. For this reason, the SPCA will lay a criminal charge of being directly responsible for animal cruelty against all EKZNW’s staff responsible for this. This will include questioning firearm licenses and firearm competency certificates, and may result in certain individuals (those directly responsible) from EKZNW being released from their service, getting a criminal record, and possibly having to pay a fine or be imprisoned.

My only objective in cooperating with the SPCA in this manner is, once again, not out of spite or anger. I understand EKZNW’s position and despite botching up the job, they probably just tried to do the right thing: ‘removing a problem animal’. I wish however that EKZNW will review the shoot to kill policy, and/or think twice next time they see a pet dog in the green belt area. We as the St. Lucia town community do have a responsibility too though, to keep our dogs all inside our yard (as per the municipal by-laws) so they cannot become problem animals. And maybe we must engage with EKZNW in a collaborative manner and suggest that in case a pet dog is found causing problems, that instead of dispatching an EKZNW unit to shoot the dog, they must maybe phone the ‘St. Lucia Town dog owners association’ and give them a certain time frame to 1: catch the dog, 2: submit the dog to EKZNW, which will 3: only release the dog upon payment of a fine. This to me is fair.

In any case, let us all work together to ensure that this never happens again!

Nick van de Wiel
Tailor Made Safaris is an official partner of: